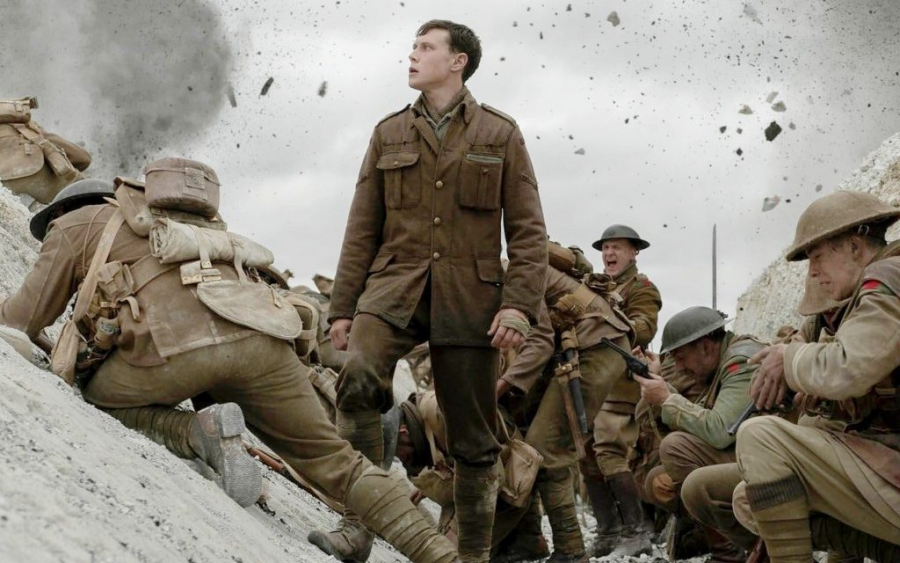 1917 is a cinematic masterpiece, not only through its revolutionary camera work but also for its soulful storytelling and incredible audio design. A multitude of factors justifies this film’s whopping 10 Oscar nominations.

Legendary cinematographer Roger Deakins has proven his mettle once again. After taking the Oscar in 2018 for his work in Blade Runner 2049, Deakins now takes on a new aesthetic: the desolate, gray battlefields of World War I. Yet, even with the usual claustrophobic gloominess that this kind of setting tends to bring, the camerawork brings a sense of gripping beauty. The continuous shots capture both the tension-filled close quarters moments as well as the swelling but harrowing grandeur of a large-scale battle scene. Some stand-out moments include an impressive use of light and shadow where amid a burning building, a soldier appears out of the smoke, shrouded in a silhouette, making our protagonist hastily decide if he is the enemy or not. Another example is when our two runners are sneaking through an abandoned German trench, and their search brings them to a pitch-black cavern. The eerie beams of their flashlights accompanied by the silent tension makes for a haunting experience.

The entire gimmick of 1917 is the whole “one take” aesthetic. However, merely calling it a gimmick discredits the amount of effort that goes into such an effect. Some cuts occur throughout the movie, but the amount of effort into creating a nearly seamless project (excluding the one deliberate blackout in the middle of the film) is immense and reserves all the praise it receives. There’s also a significant amount of diversity in setting, conveyed thoroughly by color. Schofield traverses through underground, underwater, and wide-open settings all alike, and the color scheme of the film continually fluctuates to reflect this. Flames reflect off of the moist rocks of broken buildings, dust and filth cover the camera after explosions, and bloodstains darken in color over time. It’s all so real.

Having watched a director video on the behind-the-scenes of the movie, I found it very interesting how they went about designing the sets and creating the “one-take” camerawork. Model sets were created for every scene with miniature lights being used to model how the sun would affect the scene. Entire days of filming were canceled when the sun and lighting were not right that day. Because of the “one-take” design, the lighting had to be the same throughout the movie, even when filming weeks apart. The focus on creating immersive and beautiful set design shows itself in a scene when Schofield found himself in a German-occupied city completely lit up with flares. The designers recreated the scene on a miniature scale and meticulously recreated the lighting and shadows in the movie based on the model lighting.

War movies are centered around some war, whether it’s historical or not. However, most of them, 1917 included, tend to use the actual premise of war as a backdrop to support the larger plot at play. Saving Private Ryan was a tale of a band of brothers searching to rescue one soldier amidst the chaos of World War II. Full Metal Jacket highlights the duality of man and how one’s psyche can be degraded to such a degree due to the effects of the Vietnam War. Here, 1917 displays a simple, yet grueling journey of a race against time that the protagonists must go through before the war machine of the western front continues marching. Their mission: take on the task of a runner and send a direct order to an allied battalion dozens of miles away to prevent them from walking into a trap. This linear type of storytelling has allowed for a more personal experience as we see all of the struggles and victories that come about. We feel their fear as they cross no man’s land into enemy territory. We feel their exhaustion and desperation whenever they take a moment to rest and feel sorry about themselves. With the enormous pressure of having over 1,600 men’s lives counting on only two, 1917’s conflict lies not with German soldiers, but with themselves as a test of their human spirit in both mind and body. I will say, however, that while the visual and audio storytelling was gripping throughout, the dialogue and script remained rather mediocre at times. This may be forgivable since the movie is trying to tell us a story of two simple, ordinary soldiers and not witty know-it-alls. Still, there is an absolute lack of memorable lines or a hook in the script that would utterly capture your full attention. Again, this is a remarkable achievement, nonetheless.

As most war movies either focus on the dehumanization of combat or the action of battle, 1917 alternatively has an incredible focus on creating tension throughout the entire film. Lance Cpl. William Schofield and Lance Cpl. Tom Blake is sent on a mission-impossible type journey to stop a British attack, saving 1,600 men. The weight of this order is continuously increased as they need to inform Colonel Mackenzie within a dangerously short timeframe, or all of the men, including Blake’s brother, will perish. Schofield is initially annoyed that Blake had chosen him to carry out the mission, and is furthermore distraught when Blake is stabbed by an enemy pilot they agreed to aid. Themes of survivor’s guilt are prevalent after this point, as Blake had saved his life along the journey, and its this newfound pressure to allow his death to surmount to something that drives Schofield to complete his mission.

I expected 1917 to be like most other war movies when entering the theatre, with a plot focused on constant action and exchanges of gunfire with the enemy. 1917, however, builds a very “human” story and keeps you on the edge of your seat through raw emotions. There are very few scenes of conflict with the Germans throughout the movie as 1917’s focus is the self-conflict within our hero, Lance Corporal Schofield. He never wanted to participate in this mission and has to force himself to continue because of the gravity of the message he must deliver. The movie builds tension through its “tests” that Schofield endures throughout, whether it be direct opposition with the enemy or a mischievous rat.

Sound editors Oliver Tarney and Rachael Tate, as well as audio mixers Mark Taylor and Stuart Wilson, have done a fantastic job of making the sounds of The Great War come alive. The team spent hours upon hours meticulously researching preserved trenches, historical museums, and real diaries of soldiers to figure out how exactly life in the war would sound like. Distant gunshots or an airplane passing overhead would be accomplished through multiple microphones scattered about, giving the audience a sense of confusion just like the protagonists. Overlapping chatter amongst soldiers huddled in the trenches, reading their letters to each other, or telling jokes would allow an auditory glimpse into what trench life would be like. Of course, the real handiwork of the sound team would shine in the scenes of quiet tension or loud battle scenes. Moments of dangerous silence had every gasp of breath, dirt-covered step, and clutter of debris feel seamlessly woven in and real to both the audience and the characters. In the scenes where entire battalions would charge at each other, the collective battle cries along with the faint whistling, then the deafening impact of artillery gave me chills.

The audio of 1917 added so much to the sensation of tension in the film. There’s this scene where Schofield and Blake are investigating a German bunker, comparing every aspect of their encampment. Schofield spots a tripwire and gingerly informs Blake to stand completely still. The film stays silent for a split second, just two soldiers in a dark, abandoned room. Suddenly, one of the rodents the two men were inspecting falls from the ceiling, and you hear the squeaking and skittering of the rodent as it charges into the wire. Before either of the two men can stop any contact, the entire bunker explodes. Within such a small time frame, there’s a beautiful contrast of curiosity, apprehension, and outright fear that is conveyed through the audio design alone. The aspects of this sound design reflect the serenity of the abandoned camp and the urgency of Blake screaming for Schofield as you hear the rubble and gravel collapsing after the explosion.

The music choices in the movie are beautifully chosen to develop this story of raw human emotion further. The scene in the German-captured city lit up with flares is once again a fantastic example of this. With the city being torched, the music choice perpetuates a feeling of sorrow and the devastation of war throughout the entire theatre. The audience joins Schofield in watching the city burn down until a Schofield gets spotted by a German, which prompts a chase. The music suddenly switches to an intense, fast-paced beat as Schofield frantically tries to escape the German soldiers. The audio design in the chase scene makes the audience sit at the edge of their seat in an otherwise simple chase scene. In the end, Schofield jumps into a river to escape, and the music abruptly stops, being replaced with the sounds of being underwater and splashes as the chase suddenly comes to an end.