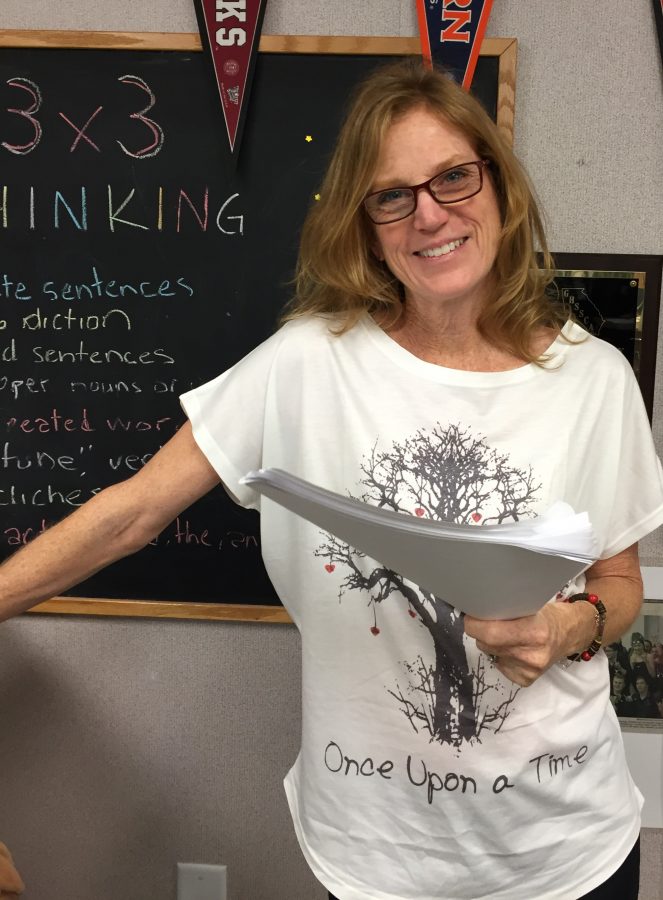 Ms. Kerry Langley is a beloved AP and honors English teacher and a Championship winning swim coach at Lambert.

“When I had my first two kids, Scott was four and Shawn was two, I worked in advertising and I was pretty successful- I flew around the country. They were the first ones dropped off at daycare and were (unintelligible) last ones to be picked up. I didn’t really realize the meaning of life, I was just too busy making money and selling and making advertising campaigns. My dad got sick at the age of 58 and was diagnosed with, well, they didn’t know what it was but it ended up being colon cancer, and he died that year. He was my best friend, he taught me how to throw shot-put, we used to go running every morning together, and it really devastated me, where you lose all faith and wonder “What’s the meaning of life?”- that kind of questioning moment that’s pivotal in everybody’s life; everybody goes through it. So, I decided to run a marathon in his honor and that’s how I got through it and how I was finally at peace with losing my best friend, basically. So, I trained all year for a marathon in his honor. Three days before the marathon, I sprained my ankle and the doctor said “You can’t run.” I disobeyed him; I ran it anyway. I ended up almost getting the time that I wanted, with a sprained ankle, but I screwed up my knee and had to have knee surgery after that. But at that point in time, it didn’t matter. I went to his grave after the race and I put the medal by his grave. And that was just so peaceful and I’m okay with him, sometimes there’s moments where I wish he’d be around. Like how my son just graduated from ‘Bama- I wish he was there. But I know that everything comes full circle. He’s the motivating factor in my life. Even when I had Colby ten years after that, I knew that he would be okay with how I was raising my kids, and I was just doing exactly what he would do. I’m pretty strict, I expect A’s, I expect the best, I expect them to do more than what’s asked and that’s what he asked of me. That’s how I’m raising the kids and I think that’s how I teach the class. So I guess the motivating factor in my life would be my father who passed away, even when I was going through breast cancer and all that, it was okay because I know that he went through it, and he was a proud man until the very end.”