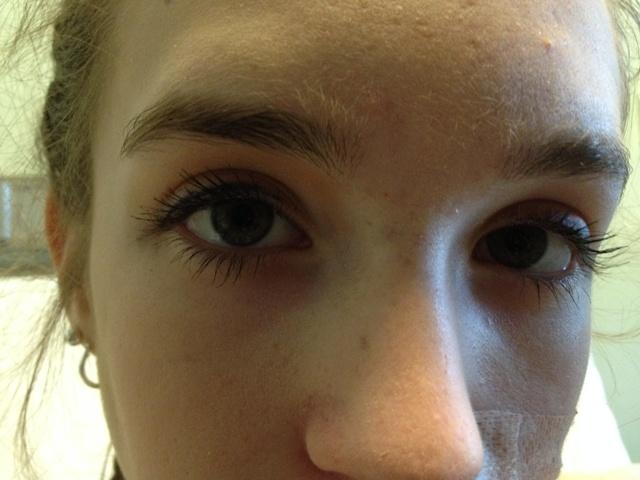 The eyes of a student diagnosed with anorexia capture the suffering that the disease encompasses.

Mental illnesses are severe issues. They kill people and they devastate lives; not just those diagnosed. Those suffering from a mental illness need to comprehend that they are not alone. Nobody is alone with their struggles, even if it feels like it at the time. The issue is that most people are either not aware of the severity of these diseases or they just do not care. “I do not think people have a full understanding of what mental illness really is and how it manifests itself in real people in real life” A local therapist, Jamie Glazerman, claimed. Society as a whole needs to be more conscious; these diseases kill people. Not just physically, but mentally as well. The idea of a mental illness is not foreign and certainly not rare. Around 1 in 5 people, ages 13-18, suffer from a mental disorder during their life time. That means that out of five friends; one of them will experience great pain from a mental disorder during their life. Common remarks concerning these statics are regarding the severity of the diseases. Many people can recognize that mental disorders are common but they cannot accept how intense a disorder can be. Suicide is the 10th leading cause of death in the United States. Ninety percent of those who commit suicide have a mental illness of some kind. That should express just how severe a mental illness can be. Ninety percent of suicides are due to a mental illness. If all of those people had been properly treated or expressed their anguish; they would still be alive. A lot of people suffer in silence; but that is not necessary, being mentally ill is nothing to be ashamed of. I spent a good portion of time interviewing students at Lambert High School. These interviews helped enforce my belief of just how common and devastating a mental illness can be.

Lindsey-
I felt anxious and restless in every class. I began to intensely hate being in a school setting. Panic was constantly depriving me of the focus I should have had. I was always worried. I had one class, drama, where my anxiety would elevate dramatically. A group of kids would sit at the back of the classroom and laugh as everybody else presented. I would freak out when it was my turn to present. The fear, that everybody was constantly staring or whispering about me, was constant. When I reached eight grade my mom took me to the doctor. I was officially diagnosed with social anxiety. I began therapy, but the hour was purely spent with questions such as, “How is your anxiety?” “How was your week?” and it did not help me that drastically. My coping mechanisms were mostly personal tactics. I discovered that I had to be my own best friend. It all came down to me. I had to kick myself into gear. It was hard to get out of that state but completely necessary. I had to accept my issue in order to help myself. After a while, I was advised to get tested for bipolar 2. The cost was too much for my mom, so I never went. I still get little pangs of anxiety sometimes, but I know how to work through it. It has gotten increasingly better; although it is not totally gone. I do not let my condition take over my life. I think people need to be more aware of social anxiety. Most people don’t recognize it or they mistake it for being shy. I am not a shy person. An actual illness would take over. In class, when kids with social anxiety are forced to present, others don’t understand the struggle. For most people it is just “I have to present, oh no” but for others it is the end of the world.

Daniel-
Middle school was torture for me. Three supposedly great years of my life were horrid. In 7th grade my mom made the resolution to take me to a therapist. I was tested for several mental illnesses. I was officially diagnosed with anxiety depression. When I first recognized what this meant I was full of shame. I felt that shame towards myself; as a person. I believed that I was no longer “normal”. In my eyes, everything would be different from here on out. I was completely wrong. I have become a master at learning how to adapt with my illness. I realized a while ago, most days are good, but there will be several days, here and there, where life seems unbearable. I am not fully recovered, but I don’t believe that’s a logical expectation. With a diagnosis, such as depression, you never fully recover, you simply progress. My savior was music. My best advice to anybody that is dealing with a mental illness; would be to find something that helps you. Discover something that you can use as a healthy coping mechanism.

Billy-
I have always shown signs of bipolar disorder. My erratic mood shifts have caused stress on my family and friends. I have always been terrified of developing bipolar disorder; to the extreme that I have to be put on medication and cannot have often social interaction. For most this would be an irrational fear. For me, it is very possible. My great grandmother and grandmother were diagnosed with bipolar disorder and my mom shows continuous signs of this disorder. My mom has stayed up with me on a couple of nights and explained what this mental illness entails. I have determined that the most important thing is support and understanding from friends and family. They should be fully educated on what it is and what it puts somebody through. Medication is always an option, if the illness is bad enough. However, this illness isn’t understood or taken seriously by most people. A lot of people use the term “bipolar” as an exaggeration or insult. Most of those people have no idea what being bipolar really is. Bipolar is a serious issue that needs to be handled as one. My relatives, and so many others, would be greatly relieved if this illness was taken more seriously.

Allison-
It all began in 6th grade. I was a self conscious little girl who worried too much about my weight. I realize now; how skinny I was. I had been an anxious person for my entire life but it peaked in middle school. I began to skip breakfast and lunch; I barely consumed dinner. My parents realized what was happening and they took me to a doctor. I was officially diagnosed with anorexia nervosa. Eventually, I began to see a therapist and it got better; slowly but surely. There are still some days when I feel like I need to lose weight, but for the most part I am healthy and happy. Anorexia caused a lot of pain in my life, but it also helped me in several ways. I became more faithful to my God; through the recovery process. I also realized that body image is an issue for most women. I am not alone. I am not ashamed of my illness anymore. Everybody has flaws in their life; this was mine. I know that I can help others dealing with this same issue; after battling this mental illness myself. I believe that eating disorders are glamorized and too many jokes are made out of anorexia and bulimia. It is a serious issue and needs to be treated as one.

It is not just society that cannot seem to get a grip on the concept of mental disorders. Several companies and the government cannot seem to either. Anna Westin committed suicide in February of 2000. She had been officially diagnosed. Her family was aware of this and committed to doing anything possible in order to save the life of their daughter. Anna’s doctor was aware of just how detrimental Anna’s condition was and she recommended immediate hospitalization. The Westin’s insurance company denied them of treatment for their daughter. They claimed that she didn’t need it and should be taken home. Because of this decision, Anna was denied of the treatment that was required to save her life. I spoke to Leslie Cox, a professional nutritionist at Children’s Health Care of Atlanta, who proclaimed “I could go on and on about how Eating Disorders are not taken seriously. There is such a disparity between medical coverage versus mental health coverage for treatment”. It is not just anorexia that doesn’t get the amount of health care coverage necessary, it is all mental illnesses.

Among most mental illnesses, eating disorders, such as anorexia, are not taken seriously by a lot of people. “I think serious cases are too overwhelming to know what to do with and minor cases are looked at in a ‘they aren’t trying hard enough kind of way’ So, no, they are not taken seriously enough,” Glazerman said. Jokes are often made regarding these disorders, surrounding models and other people. A good portion of society likes to say that an eating disorder is a choice. That is untrue; just as every other mental illness is not voluntary. “Eating disorders such as anorexia, bulimia, and binge eating are not a choice. They are a serious mental illness which can have devastating impacts”. The degree of commonness that eating disorders have is affecting younger generations as well, 42% of first, second, and third grade girls want to be thinner. A majority of those girls have not even suffered through the body shaming that occurs within society. Girls should not grow up wanting to change themselves.

I truly wish that anybody at Lambert High School who suffers from any kind of mental illness is inspired to be brave and seek help because of this article. “Often people think you are “crazy” if you need therapy or weak if you need medication. People are afraid to share their struggles publicly for fear of judgment or retribution” Glazerman shared. Those suffering need to be aware that receiving help does not make them weak. It makes them brave. If you know of or are somebody who needs immediate help; please call the “SOS Teen Hotline” at 800-949-005