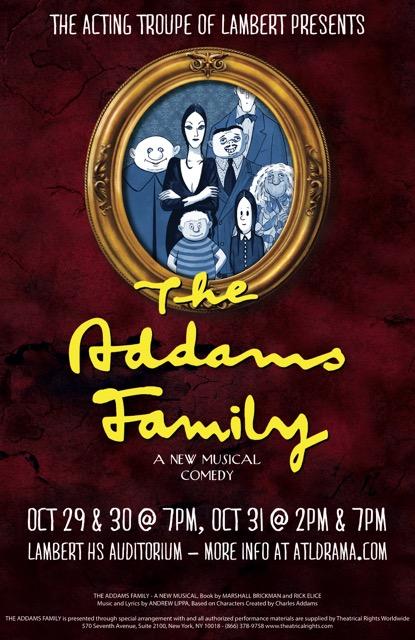 Addams Family flyer represents the eclectic, off-beat style that the captivating and humorous show provides, giving the information of the upcoming musical comedy.

Coming in a resounding second place in regional dramatics competition, the Acting Troupe of Lambert proudly presents a riveting tale of music, macabre humor, and Halloween-esque performance, the cast of the Addams Family the Musical have crunched out three rehearsals a week for the past couple of months. Working on the last two weeks of the cumbersome “Tech Week”, some insight is gained on the production.

In the final stages of rehearsal prep time, with Tech Week taking precedence, fine-tuning rears to an end as the October shows comes closer. The musical will be hosted October 29, 30, and 31st, with a total of four showtimes, including a Saturday matinee, at the Lambert Auditorium. Students who come in with a theater-inspired shirt will gain half-priced entrance on the Halloween showing.

This musical, a showing of the infamous, wry story-line, displays the eccentric nature of the notoriously dark and satirical family. The plot line is referred to as the Addams Family, “with a unique twist”, as described by musical director and teacher Mr Ryan Wason. Stage direction, as well as choreography, will be conducted by Carly Berg, who contributes her efforts into making the show a coherent and successful representation of the iconic family.

Family friendly, and just as entertaining and daring as the original, the musical follows the sardonic light that is known and loved. Exaggerating certain gothic dynamics, hair styling and makeup concepts remain true to the original macabre comedy. Hairstylist, Camille, stresses the importance of staying true to the culture of the Addams Family as we know it. Cast expresses their excitement in the upcoming showtimes, and encourages student, faculty and family alike to come enjoy the thrilling performance.