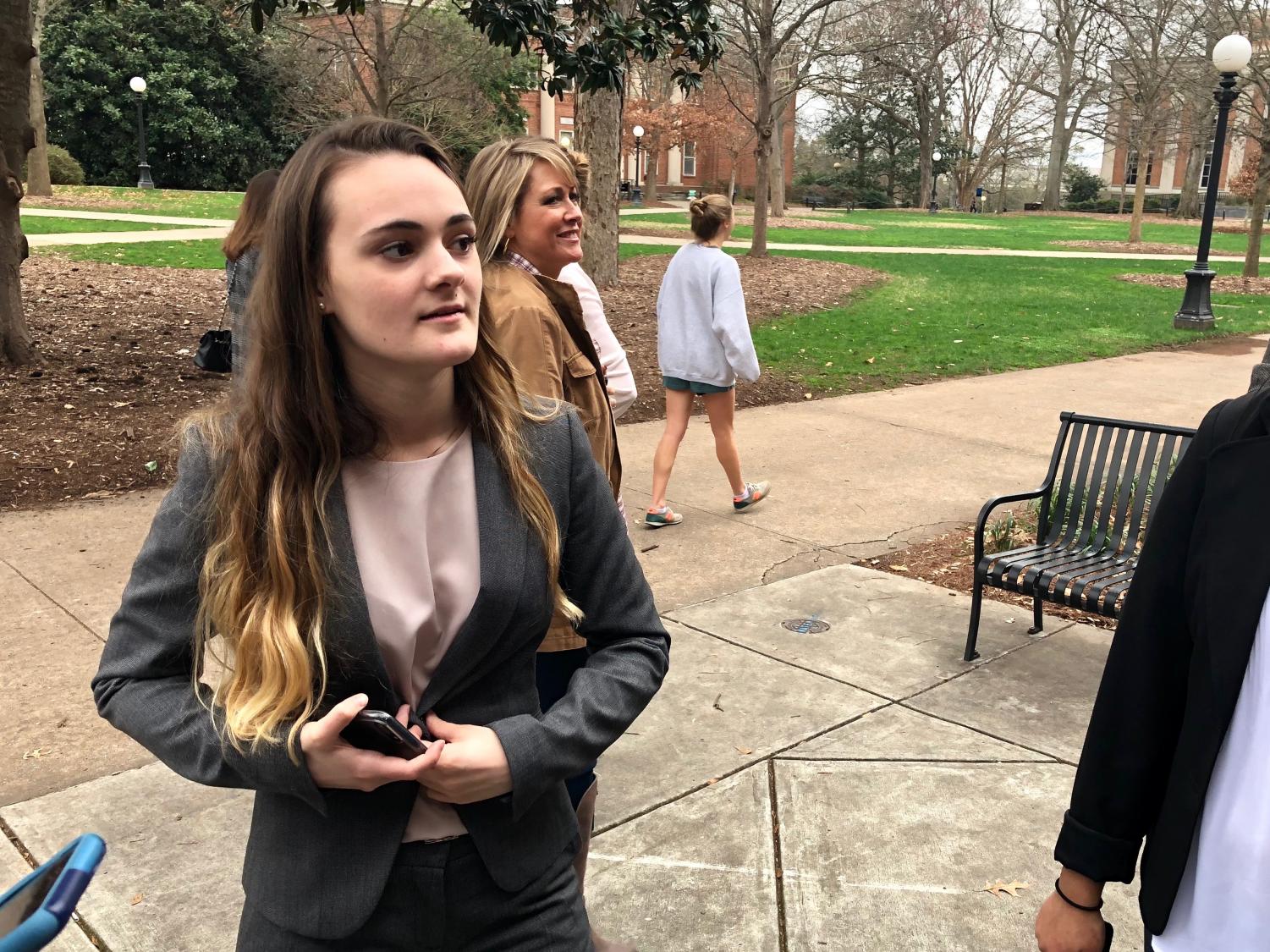 Senior, Diellza Koraqi, talks with her team mates outside the UGA law library after competing in the 2018 district mock trial competition.

Senior, Diellza Koraqi, talks with her team mates outside the UGA law library after competing in the 2018 district mock trial competition.

“I had never really thought about law until the fifth grade, if that makes sense I know we’re all young anyways. In the fifth grade, my teacher had this program called Mock Trial, and that was the first time I had ever heard of it…. She chose a group of her students to be a part of that (mock trial). I didn’t get into that, and when I heard about it I was just like, “Oh no, I have to be a part of this.” So I kinda finessed my way in. I kept on talking to teachers and kinda pushed my way into there until they finally accepted me, and then I joined in and I saw that we were actually working with a real lawyer, so I pushed my way to become a lawyer. So I guess fifth grade really started it for me.

Mock trial is a combination of both law and theater because we have our witnesses who are acting, but they’re playing the role of someone being accused of doing something or someone suing another person, so that’s where the theater aspect comes into it. I guess the theater aspect also comes into us the students who get to play as lawyers, but then the law comes into it when the attorneys and the witnesses have to work together and look at the rules, and understand what questions can be asked and what types of questions can’t be asked. We learn just how the law works and how it allows certain things to happen. Mock trial competition is intense, intimidating sometimes, because we have a defense team and a prosecution team, and what will happen is that our defense and prosecution will become two separate teams and we will go against another school. For example, I was on defense this year, so my defense team would go against another school’s prosecution team, and no one knows which school is which so it’s kind of intimidating…. It’s fun and it’s competitive and it gets everyone riled up, and I think it brings out a fierce side to people.

I got the internship at a law firm through honors mentorship at the school. We have the option of work based learning and IE2, and our new option which just started this year is honors mentorship. You apply for it, and in this application you talk about what career field you’re interested in, and the lady who works at the county and is in charge of running honors mentorship programs for forsyth county schools will help you get an internship at the career field that you listed. So it was thought that way that I started interning at a law firm. Interning at a law firm is fun and intimidating and I enjoy it a lot. In the beginning, it’s kinda scary because you don’t want to do anything wrong. I don’t think it hits you about how real law and everything that happens is until you actually get to be in that environment. When I’m interning I feel like there’s no room for mistakes, and that’s just me because I like to be a perfectionist and I like to be in control of everything, looking all calm and collected and all good and I don’t like to show when I’m feeling crazy on the inside. I’m stressed in a way, but I’m learning and I like that. I’ve wanted to be an attorney since 5th grade when I finessed my way on to a mock trial team. Mock trial has definitely helped me with making speeches in front of people, for sure has helped me talk, has helped me learn to push myself and not just try and find an easy answer but actually go out there and find the answer.” -Diellza Koraqi

Want to become part of the Lambert Post staff? Fill out our application in the "About" navigation drop-down menu!