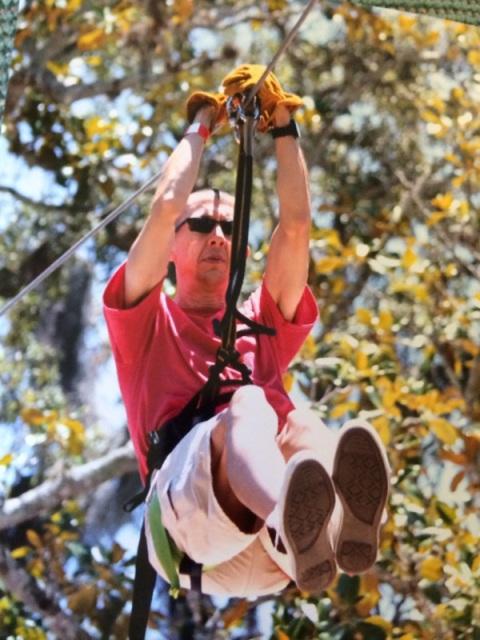 An old picture of Mr. Sims as he enjoys outdoor activities in the nature

A new staff superstar is introduced every year based off of their hard work for the Lambert Longhorns. One lucky teacher is congratulated with a pleasant surprise in September. Mr. Tony Sims was open for an exclusive interview after he was announced as this year’s Teacher of the Year. He was very humbled and surprised to be announced as the teacher of the year as it is his first time ever being appointed as one. He has been at the school since 2010, teaching both German and Latin.

“It was kind of difficult to teach both at the same time because they are two different languages. I had to prepare for both lessons each day,” says Sims. He’s now the one and only Latin teacher here at Lambert. He enjoys focusing on one language at a time. As for the qualifications of becoming a teacher of the year, he believes that all of the teachers in the building are all so passionate about their never ending work load.

“You pour yourself into everything. It’s a job that never stops. You could do work 24 hours a day and seven days a week but you still find more work left to do,” says Sims. “My biggest goal in trying to teach Latin is to give them an insight into a group of people of who essentially haven’t been with us for a very long time and that people are people with the same emotions and thoughts. Things don’t change that much with a blink of an eye.”

“‘Per aspera ad astra’ – through difficulties to the stars. I always tell my students this famous Latin quote to keep them motivated,” says Sims.

The newest addition to the Longhorn staff called for an appearance of Mr. Tony Barrett, who sparked our pep rally early this school year. Barrett and Sims are both part of the foreign language department.

“I see and talk to him every day, all day long. He’s very caring for others and just always brings up positivity in the atmosphere,” says Barrett, as he expresses his own appreciation for Sims. ”He’s an outstanding teacher who seems to be very involved in his teaching. Every time I pass by his classroom, I hear him involving with his students to teach the class.” As Barrett spends his first year at Lambert, he continues to look at Sims as a great example of a really good language teacher. “He sets a great model to look up to. I am still in the process of getting to know him, but I want to emphasize that he is very involved,” continues Barrett. The new teacher could not finish out his interview without having to compliment his fellow colleague.

Rachel Kenney, a senior at Lambert, has been enrolled in Mr. Sims’ class for all four years of high school. She took German one year and continued on with Latin for the rest of the time.

“The class atmosphere is great. It is my favorite consistent class,” says Kenney as she explains how Mr. Sims tries to get to know each student each year, not just by a number as in student one or student two, and he really cares about his kids’ grades. “Mr. Sims is really charismatic and fun. As a teacher, he is really informative and he makes learning a lot more entertaining. So, I’m never bored in his class,” tells Kenney. She spoke about her own discovery in herself of her enjoyment with learning different languages through her teacher’s effort. She also believes that she will be double majoring in college including a foreign language of her choice, preferably, romance. “He just made it a really enthusiastic class and I’ve never complained about taking a foreign language due to his teaching,” adds Kenney as she finishes her interview.

Thank you Mr. Tony Sims for an open mind towards the interview and once again, congratulations on your award!