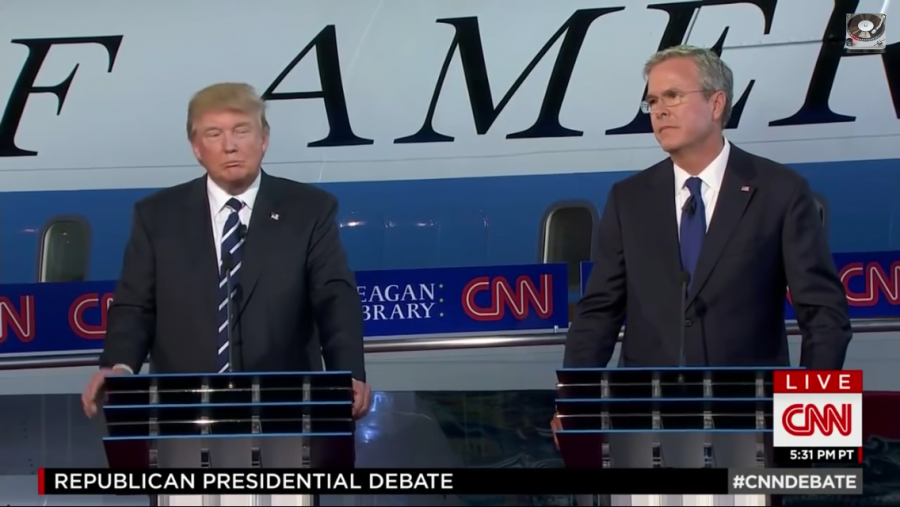 Screenshot of an official debate video

Trump and Bush face off in the September 16 debate. Trump has attacked bush, as well as other candidates, on and off the debate stage.

What does it really mean to “speak American”?

Everyone knows that Republican Presidential candidate Donald Trump has no qualms when it comes to going on the offense against his fellow GOP candidates. Recently, the Donald had some harsh words to say about Jeb Bush, former Florida governor and member of the well-known Bush family. Trump criticized Bush for speaking Spanish on the campaign trail, saying, “He should really set the example by speaking English while in the United States.” Former governor Sarah Palin voiced similar criticisms, expanding on the idea that politicians should set an example for others by “speaking American”, or English, the supposed “correct” language to speak in the United States. Basically, Trump and Palin want all Americans and the immigrants to our country to be speaking the native language of the United States, the language of the first people to inhabit this land and nation. Not a language spoken by immigrants. Following this logic, then, shouldn’t we be speaking a Native American language?

The first people to inhabit the Americas were the Native Americans such as the Cherokee, Wampanoag, and the Iroquois. From Christopher Columbus onward, the Americas were populated by immigrants from Spain, Portugal, Great Britain, and other European nations. The idea of “speaking American” is a complex one, because it forces one to consider what it means to be American. Our nation was founded by descendants of immigrants. To be American means that we may all come from different backgrounds, but we are united in our common belief in our unalienable rights to life, liberty, and the pursuit of happiness. I think that the way that politicians can be setting a good example for the people of our nation is by celebrating different languages and cultures and incorporating them into the idea of what it means to be an American.

History has already shown that trying to erase the existence of other cultures leads to misery, misfortune, and violence against the minority peoples, but another Republican presidential candidate, Rand Paul, said, “I think assimilation is an amazing thing. A good example of how, even in our country, assimilation didn’t happen — and it has been a disaster for the people — has been the Native American population on the reservations. If they were assimilated, within a decade they’d probably be doing as well as the rest of us.” The forced assimilation of Native American tribes by the U.S. government is a prime example of the horror of the attempted erasure of cultures and languages. The boarding school programs for young Native Americans was extremely harsh and restrictive, as young children were forbidden to speak their native languages and forced to take European names. These damaging programs, coupled with the forced relocation and genocide of almost the entire native population, seems far from “an amazing thing”.

The attempt by the U.S. government to erase the presence of Native American cultures was harmful to the natives, and to repeat history and attempt to destroy Latin American and other cultures in the United States would be a step backwards.  The United States does not have an official language, and never has had one, encouraging the use and celebration of all languages and customs. Politicians can be setting a good example for the nation’s youth by promoting bilingualism, as knowing more than one language has many benefits and the United States lags behind other developed nations in language education.

“Speaking American” means more than just speaking English. Americans come from many different backgrounds, and the nation was founded on this idea of diversity allowing for a richer American culture. Trump, Palin, and Paul can try to deny it, but the truth of today’s world is that America is a diverse nation, and politicians should embrace that fact instead of trying to deny the history of our country and the ideals that it was founded upon.