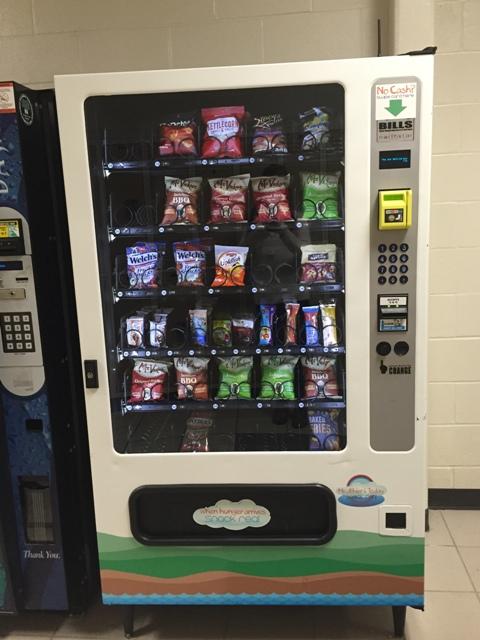 Chocolates, chips, and Chex Mix are back… but at what cost?

While students are delighted to see the reappearance of tastier snacks in the school vending machines, the truth is that the administrators are playing a dangerous game. Reinstating chocolate and sugary snacks such as Muddy Buddies, chocolate pretzels, and Pop Tarts is no easy task, revealed a vending machine snack delivery man.

“We have to do it discreetly,” he disclosed, wishing to remain anonymous for the safety of his job. “You never know when she might be looking. That’s why we usually load up the snacks on the weekends, when she’s most easily distracted.”

Who is this Big Brother-like character the delivery man speaks of? That would be First Lady Michelle Obama, whose time as the FLOTUS has been marked by her campaign to combat childhood obesity through many ways, including making food available at school healthier. But all students have come to terms with the devastating fact that making school lunches healthier makes them, by no stretch of the imagination, any tastier.

I was able to accompany the food deliverymen on a late-night snack implementation last week, observing their techniques of elusion. They moved stealthily, inserting the crunchy Chex Mix and Pop Tarts before their actions could be registered. They shared with me that they picked that particular week because it aligned with Obama’s trip to London, reducing the chance that she might catch wind of their mission.

“Sure, it’s risky,” another unsung hero told me. “But it’s worth it when you see the smiles on the kids’ faces, crunching away on chips and chocolate and tossing their browning apples and whole-wheat pizza into the trash.”

We can only hope that their operation perseveres and spreads, bringing tasty snacks back into the lives of teenagers. Godspeed, vending machine deliverymen. Godspeed.