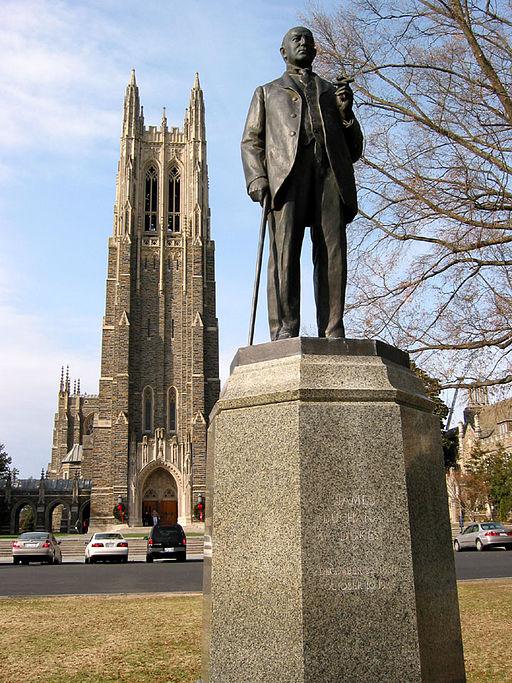 Photo by by Selefant via Wikimedia

Statue of James B. Duke in front of the highly acclaimed Ivy League school, Duke University.

Brian Grasso, a freshman at Duke University disagreed on completing the summer reading assignment due to his religious Christian beliefs. He published his thoughts on the book on the Duke freshmen class page on Facebook to support the  students struggling through the same difficulties from the book. The book in question is a graphic novel, written by Alison Bechdel,“Fun Home”, which includes  illustrations of  sex. Bechdel exposed her personal experience of her childhood, with a closeted gay father, who was also an English teacher. He tried to hide the fact that he is homosexual which influenced Alison’s life, as she admitted that she’s also gay. The title of the book refers to both the funeral parlor, according to her father’s position as the proprietor of it, and also the family’s gothic and meticulous home, filled with gilt and lace. As Grasso considers the Bible to be the Word of God, he believes in the passages that deem viewing  pornographic materials a sin for all Christian believers. “If the book explored the same themes without sexual images or erotic language, I would have read it,” says Grasso.

The book itself became a big hit in the market and even won several awards. It is loved by many due to the author’s tragic but funny childhood memories. Even though many more teachers are informed of the book and are now trying to corporate Bechdel’s writing to their classes, Grasso emphasizes his firm religious belief by not being able to accept the value of this assignment.