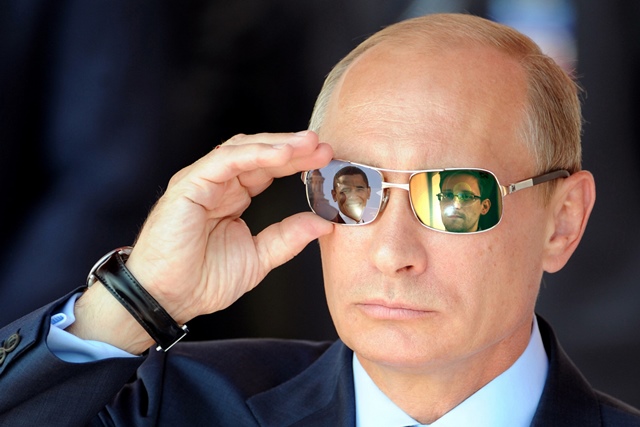 Is Putin picking between Obama and Snowden?

Is Russia too cold for Edward Snowden?

How Snowden came to Russia and his (unlikely) return

After two years in Russia, Edward Snowden wishes to return to the United States.

Snowden’s lawyer in Russia, Anatoly Kucherena, stated, “Edward Snowden is ready to return to the US, but on the condition that he will be given guarantees on receiving a fair and impartial trial.”

But Obama and his administration are unlikely to welcome him warmly, if at all.

A petition titled “Pardon Edward Snowden” and posted on “We the People” – the White House’s petition service – boasts 167,955 signatures. Despite the support, however, it was answered unfavorably by Lisa Monaco, the Presidential Advisor for Homeland Security and Counterterrorism.

One excerpt of her response reads, “Instead of constructively addressing [issues such as mass surveillance], Mr. Snowden’s dangerous decision to steal and disclose classified information had severe consequences for the security of our country and the people who work day in and day out to protect it.”

She does not offer any iota of praise, rather she continues to critique his decisions.

“If he felt his actions were consistent with civil disobedience, then he should do what those who have taken issue with their own government do: Challenge it, speak out, engage in a constructive act of protest, and — importantly — accept the consequences of his actions.”

She gives a possible final verdict with a bitter bite to finish.

“He should come home to the United States, and be judged by a jury of his peers — not hide behind the cover of an authoritarian regime. Right now, he’s running away from the consequences of his actions.”

On June 6, 2013, Glenn Greenwald revealed that the US National Security Agency has had unrestrained permission to collect phone data from Verizon for three months. The Guardian reporter was then be joined by the Washington Post as it too exposed the NSA – except now with a program known as Prism. It allows the government to gather user information from sites such as Google, Yahoo!, Facebook, Microsoft, Skype, and YouTube. (Note: The program is not as malicious as was initially portrayed. Read through this article to know the details.) Both news sites extracted their information from stolen NSA documents, submitted by an unknown whistle-blower.

The stories appalled the public that felt as if “Big Brother” crossed into reality while the government braced itself for a surge of criticism. Obama released a statement that did not deny anything however. Instead, he assured citizens that the programs only intrude on privacy to ensure national security. If one was to be investigated, it would be on numbers and not names. All the while, the eyes of office looked to and fro to find who was responsible for releasing the documents.

The next day, they found not only with their eyes but heard with their ears a video interview released from Hong Kong. Edward Snowden, a now former NSA employee, appeared and divulged himself as the source of the documents. During the course of the interview with Glenn Greenwald, Snowden explained his motivations for betraying the NSA.

The position as a systems administrator brought Snowden in contact with the agency’s information regularly. According to his testimony, Snowden began to witness patterns he interpreted as abuses of the government. A conviction grew upon him until he could not disregard it.

“… over time [the] awareness of wrongdoing sort of builds up and you feel compelled to talk about. …until eventually you realize that these things need to be determined by the public and not by somebody who was simply hired by the government.”

Many may have lauded Snowden as a hero subverting a surveillance regime, but most authorities in high places have disagreed.

Robert Mueller, the head of FBI, spoke to Congress to expound on his view of the issue.

“One of my problems is that we’re going to… lose our ability to get their communications… We are going to be exceptionally vulnerable.”

Mueller states “their” to refer to potential security threats: any terrorist, spy, or traitor would be included.

“[The leaks have caused] significant harm to our nation and to our safety.”

With Mueller’s charge to hunt the renegade down, Snowden applied for asylum in 20 countries. He moved out of Hong Kong and entered a Russian airport to ultimately reach Latin America. The United States government, however, stripped Snowden of his passport and thereby kept him from leaving Russia. Without an option, he stayed put until Putin complied to let him reside in the country temporarily. In reaction, White House press secretary, Jay Carney, expressed that the Obama administration was “extremely disappointed.”

Now, Edward Snowden lives obscurely while continuing to advocate his cause against oppression. He has recently opened a Twitter account to do so.

Snowden’s narrative is too complex to simplify into a “man vs. government” plot and has been too impactful to ignore.  The role of government in relation to its citizens is being questioned. Honest people in power and under power are now searching for how to ensure security while maintaining privacy. The boundaries between free speech and foolishness are being debated and scraped along a contentious plane. The answers may not come easily, but they are worth turmoil we are experiencing.