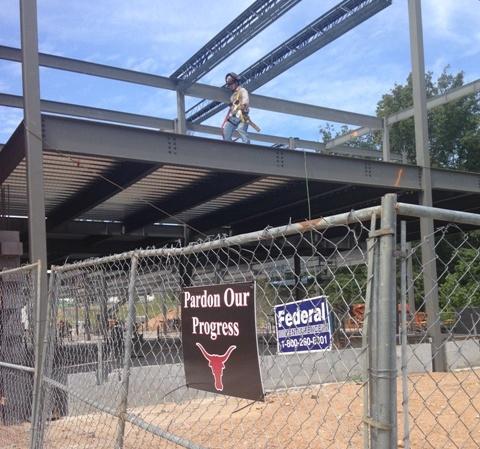 The construction at the front of Lambert moves more quickly each day.

At the start of the new school year, the students of Lambert loaded their backpacks with fresh supplies: pencils, pens, binders, and the like. But two more items could have made the cut for the list of back-to-school must haves: a sturdy pair of walking shoes and a hard hat. The construction and renovations happening to Lambert this year are impossible to ignore, and they have altered the lives of many students in attendance.

“I can’t take a shortcut to my classes anymore,” said senior Shelby Grejtak. “Also, there are too many people here. It’s very overcrowded,” she continued, voicing the concerns of many students that find themselves battling for personal space in the school’s hallways. The addition of new classrooms will hopefully alleviate these problems facing all Lambert students, relieving the oppressive feel of the hallways.

Lambert is getting completely revamped; the construction projects include a new attendance office, an expanded counseling office, a cafeteria bathroom, a lengthened band room, and a total of 19 brand new classrooms. With these new areas, it is possible that the 6000 trailer brought in this year will not be needed anymore, says Athletic Director Coach Ferrer. Ferrer expanded on the efficiency of the construction crew and the checkpoints they have already reached.

“So far we look really good [with the schedule],” he disclosed. “They finished the attendance office on time. The new bathrooms are one schedule to be finished by winter break. So far everything says that we’re looking very good for the timeline.” The completion of the new bathrooms will open up the 1600 hallway and provide a more direct access point to the 3000 trailer. All of the construction is expected to be completed by August 2016.

Ferrer also stated that there are solutions to the parking problem, an aggravation to many students that did not receive a spot this year. The removal of the 6000 trailer would open up more spaces. Also, the school could see an implementation of a parking system that West Forsyth uses, wherein students with IE ² would park where the buses park, outside of the theater, and then leave before the buses load up at the end of the day. Innovative systems such as these ensure that no matter how populated the school becomes, there will always be ways to meet parking demands.

Lambert is not the only Forsyth County high school suffering construction woes this year. According to Tom Wening, who is in charge of construction for the school district, “All five high schools have some form of additions and/or renovations set to be completed by or before 2017.” Central Forsyth, North Forsyth, and South Forsyth are all getting new classrooms, necessary additions due to the burgeoning population of our county as a whole. Forsyth County routinely tops lists of fastest growing counties in the nation, forcing the area’s schools to accommodate a rapidly increasing number of students each year.

Plans for creating a new Forsyth High school, named Denmark High School, are in the works, with a completion date in 2018. However, Lambert students will not feel the effects of the new high school for some time. With any luck, a combination of the overhaul of Lambert’s campus and the inclusion of the new high school in the county will relieve the pressures that rapidly expanding Forsyth County places on the area’s schools.